I love my family bracelet !

I plan on ordering them for both my daughthers!!

I received the bracelet and love it!! I didn't give it to my mom yet, its for Mother's day. Its really beautiful and top quality...thanks

I purchased this bracelet for my Daughter-in-law's birthday. She works and wears a lot of jewelry. She, however, does not like pearls - but when she saw the bracelet - she changed her mind - just for the bracelet. She loves it. The three stones are for her children - one is for a baby she lost at birth, so it meant a lot to her. Thank you very much.

I call this my Great Grandchildren bracelet. and I love it....I represents a lot of years of love and devotion...Thanks, Laurel, everyone would be proud to have one...Toni

I was so pleased with the bracelet I ordered for my Mom...who loved it:)..that I ordered 2 more..can't wait to get mine:)))

My bracelet is Sep, Jan, Sep, Sep, Oct, Sep. the bracelet is gorgeous...except the red Jan. looks like a purple Feb. otherwise, I have no complaints at all. It's great! 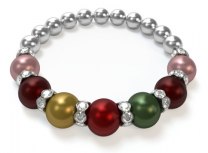 My mother's bracelet is beautiful. I ordered a size large,but it was 4 beads too large. I sent it back to have it sized smaller,Laurel did a perfect fit on it.

This kind of bracelet is a wonderful idea.....much better than the the ring.:) Mine is beautiful and I plan to enjoy it for years!!