Love my new bracelet. Fast shipment and very easy to work out problems. Ordered wrong size and sent it back. Received new size in a week. Great service!!!

I LOVE my Bracelet!!!

I ordered my Mother's Bracelet on Sunday and received it on Wednesday! It is gorgeous, well made, and I have already had quite a few compliments on it!! I LOVE it!! Thank you!

I bought the bracelet for my mom birthday. She loved it and my boss plans on ordering several. It also arrived the day of my moms birthday. My husband will be buying me one..

I bought the bracelet for my mother for her 90th birthday. I was very pleased with it, and so was she.

I love my Bracelet:) Everyone that has seen it has commented on how much they like it and how pretty it is:)

This bracelet is beautiful and certainly worth the price. I am ordering another one for my MIL. 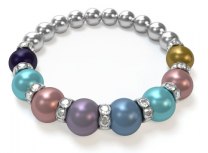 Bracelet is very pretty. I love mine.

I love my bracelet, however, because I guessed at the size, I had to return it today to exchange it for a smaller size. I hated to return it, but I'm sure it will returned to me very soon. Thanks

The bracelet is so beautiful and it has from grandparents to grandkids birthstone's colors!!! gorgeous!

My bracelet is beautiful This picture does not do it justice. I opened the box and was very surprised.