The three reasons I choose to rate the braclet as good rather than great is the size of the pearls are not as big as they look in the ad. The color of January and the July are much darker than I think they should be and the silver balls on the rest of the braclet appear to be white pearls in the ad. But, after saying all that I would say that it is very pretty and small. I would wear it along with another braclet.

I'm very satisfied with my two mother's bracelet. I know when I give the other one for a Valentines gift it'll be greatly appreciated. Thank you for offering such a wonderful bracelet.

I really was pleased with the weight/quality....I liked it so much I ordered one for my mother & my sister yesterday.....

I absolutely love my new Mother's Bracelet. The colors are a beautiful reminder of my family each time I wear it. I was super impressed with how quickly I received my bracelet. This would make a wonderful gift that any mom would be proud of!

It is absolutley more than I expected. I can't wait to get it and try it on. Thanks for such a pretty bracelet.

Very beautiful but should have ordered a small. Am returning it for a small one.

I love my bracelet and have gotten a lots of compliments. 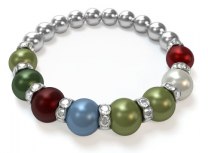 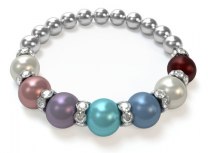 This is beautiful, I got it for my mother's birthday next week can't wait to give it to her.

I love looking at my wrist and seeing a reminder of my children, my bracelet is beautiful! I will definitely be telling my friends and family about your product, thank you so much!! :)