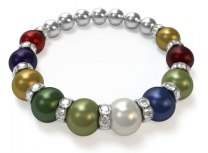 Both my bracelets are very pretty and confortable. This is my favorite. I am very satisfied.

I love it!! Looks classy.

My braclet is beautiful. As soon as I showed a friend she went out and ordered one.

Love Love Love it. It is even prettier in person!

I put the stones in the order that I wanted and they didn't come in that order,my 3 kids all have green birthstones,so I put the lighter green in the middle,and for another reason,he is my youngest child and I thought would be nice if his older siblings were on the side of him,kinda like watching over him!!! But to my dissapointment it was not in the order that I wanted!!! Not Happy!!!

I just got my bracelet today. I love it already. To me it is worth a million! Thank you very much!

Beyond satisfied in every way!!!

Oh, my gosh! I can't tell you how pleased I am with the two bracelets I ordered! The colors are so pretty, and your photos don't do them justice; much prettier in real life! I had ordered them for Mothers Day gifts, but don't think I can wait that long, so they may end up being Valentines Day gifts. I KNOW the recipients will be pleased beyond words. Quality craftsmanship, superb customer service (when I botched up placing my order), and speedy delivery too! You really aim to please, don't you??

I love my bracelet !!! I have 3 children 'all married' so I included their spouse's pearls as well and it turned out gorgeous ! After all, they're my kids too and I love them all :)