This bracelet is beautiful,

I put my husband's birthstone,mine and our 4 children.My husband of 50 years has passed away as has my daughter ,this year.Cancer is a cruel disease.I will treasure it.

I love my bracelet I had my 5 grandchildren's berthstone plus mine on the bracelet. It is beautiful. I would recommend it to all jewelry lovers. Great Mother's Day present.

The bracelet is fantastic.

I really love my bracelet. Was a little disappointed when i opened it thought the other beads were grey pearls but they were silver beads, which you said they were but i wasn't paying that much attention. I was just looking at the bracelet itself because it was stunning. I ordered a small because my wrist is small but it could be a little smaller. I have very small wrists. Need it resized. Over all i would recommend it to all..

I am very pleased with my pearl bracelet. It is pretty, light weight, and reminds me of my children and grandchildren

I bought a bracelet for my two grandkids to give their mom for her birthday. It's just beautiful and she loves it... I will be buying more...

I just got my bracelet today, and when I opened up the box I just loved it, it is beautiful.

They are so pretty, had lots of comments when I wore to church yesterday. 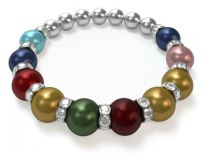 My mother loves the bracelet. I upgraded my shipping to the 2-3 day delivery and it took 7 days to arrive? I contacted the company by email and phone, was not impressed with how things were handled. Using UPS/FEDEX would be a better shipping method and the cost is about the same.

I really love it,and very quick delivery! And just say-in I have played with the place where you pick the ones you want and just kept making all different combos all very pretty !! Thanks!!