This was a very special gift to my 2nd mom this past Christmas. She was so surprised and really loved it! She already receives lots of compliments on this and she is very happy with the elegance of this bracelet. Thank you so much for a new idea for mothers.

I love it!! I have ordered 3 of them now and have a few more to buy. Good Quality. 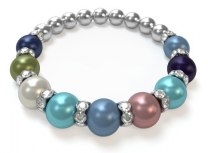 I picked these Bracelets out for my Mother-in-law and my 90 year old Grandmother and I wanted both to tell a "story" of their lives and Pearls by Laurel over exceeded my expectations...they both were truly touched and fell in love with the beauty of the richness of the pearls and the silver beads. I think I might have one made for myself. I am so glad to have found this website. Thank you very much!

We bought one for our daughter with her children's birthstone. It's every bit as beautiful in real life as it is in the photographs. She was thrilled.

Very impressed with the quality and the looks of the bracelet.

Absolutely beautiful. Fits nicely. Spreading the word to my friends.

I really liked the bracelets I ordered and both my mom & mother in law liked them as well. However - my mom-in-law's broke as soon as she tried to put it on. I had to buy new elastic and restring it for her. It was quite embarassing for me for this to happen!

...can't say enough good about it!

I absolutely LOVE my mother's bracelet! It looks so elegant but didn't cost me an arm and a leg. The colors are so beautiful! I can't say enough good about it! I would recommend buying one to EVERYONE! Would make a wonderful gift!

The bracelet is very nice and looks as good, if not better, than in the picture. The only thing I was disappointed in was that it was supposed to arrive no later than 12/24, but unfortunately, I didn't get it until after Christmas. Definitely recommended, though.