I tried to take out five beads and it completely flew apart.

Received my bracelet I am very happy with it looks just like the picture and arrived very quickly. Thank You

Love the quality and look of the bracelet! Can't wait to see my mom open it for Christmas! Its beautiful!

I read most of the reviews before purchasing this. All the other were right. I received the bracelet in about 5 days and it is beautiful. I took it to work and wondered what they all thought, they loved what it looked like and the price. I hope the person I bought it for loves it too. I will be purchasing more in the future. Thanks, Stacey

I recieved my bracelet and was very pleasently surprised. It is beautiful and fits perfect. I love it and was very very impressed with it. It will be a treasure that I will keep and wear for a long time and something I am looking forward to handing down to my daughter. 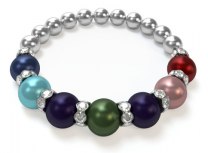 I love my mother's bracelet. It is really beautiful. The crystals between the pearls are very sparkly. I know I will wear it a lot.

Pretty but ...I thought it was called a Mother-daughter bracelet and card that came witht the bracelet only said Mother bracelet and I want to give it to my daughter. Need a box to check for that. It is too big because it streches which was not told in description. I could have gotten a smaller size. Will have to send it back.

I love my bracelet!!! My husband purchased this as a Christmas gift and let me open it early, he also put my 3 grandchildren's pearls on it along with mine. It is so beautiful!!!

I ordered one size to big. My mistake

I ordered one size to big. Is there anyway to get it cut down?????